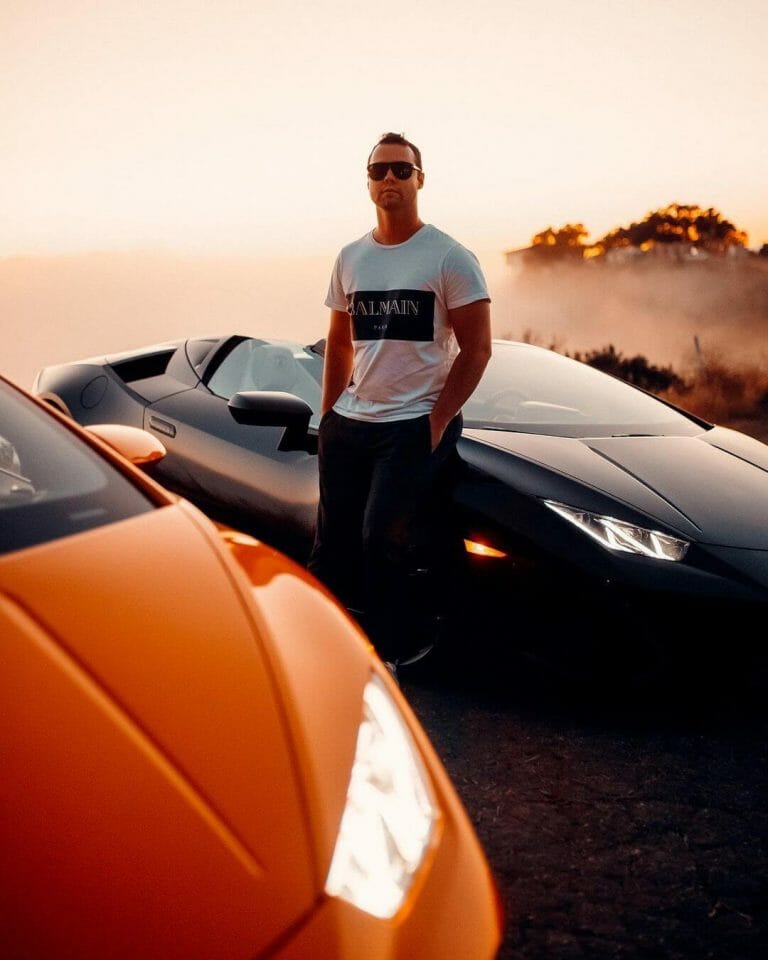 Parker is a dedicated automotive YouTuber who has been creating car-related videos for the past seven years. Summing up all the money he makes from different sources and his current possessions, the net worth of Parker Nirenstein, a.k.a Vehicle Virgins, is roughly around $4 million in 2021. He not only reviews cars but is also a big fan of collecting some super expensive cars.

His first car was a 2006 BMW 3 Series. He has also owned other expensive cars such as Ferrari 458 Special, Rolls Royce Wraith, and Ferrari 812 Superfast. Currently, he owns a 2004 Lamborghini Gallardo.

For people who are car freaks and enjoy watching car-related videos on YouTube, you may already be familiar with the popular car-related YouTube channel Vehicle Virgins. However, the channel is not just for entertainment purposes.

Vehicle Virgins’ creator Parker Nirenstein’s main motive behind creating this channel was to help his subscribers decide which car to buy by providing them with detailed reviews and honest opinions through his videos. And by the number of subscribers on his channel, it wouldn’t be wrong to say that Parker has successfully achieved his goal.

He currently has more than 2.2 million subscribers and more than 500 million views. People love watching his videos for his honest reviews and criticisms on high-performance cars and expensive models.

Other than reviews, he also uploads some fun vlogs where he is seen picking up Uber riders and random people in his Lamborghini to capture their reactions. Overall, Vehicle Virgins is a fun channel and is flourishing in recent years.

Read on to find out more about how much money Vehicle Virgins make on YouTube and Parker’s total net worth!

Parker Nirenstein, more popularly known by his YouTube pseudonym ‘Vehicle Virgins,’ is an American YouTuber who runs the YouTube channel ‘Vehicle Virgins.’ He was born in June 1994 in Palo Alto, California.

He created his YouTube channel on January 13, 2012, hoping to help his subscribers on various car-related topics like which car to buy, what to look for while buying a car, etc.

Before joining the YouTube world, Parker completed graduation in engineering from the University of Michigan in 2016. During his college years, he also worked as an intern in 2014 at Toyota, and in 2015, he worked as a Product Development Engineering Intern at Ford.

Also, Parker’s father is a wealthy entrepreneur who owns some technology companies. Hence, it is pretty evident where Parker’s exquisite knowledge and interest in cars come from.

Parker first started his career as a car reviewer and wrote several articles reviewing different kinds of cars. He himself is a car enthusiast and gives his heart and soul to creating content on YouTube.

For the last seven years on YouTube, Parker has created more than 1000 videos dedicated to cars, and he has gathered more than 2 million subscribers. He is a well-known YouTuber among car lovers.

After months of creating content on YouTube and taking up paid internship at Toyota and Ford, Parker was finally able to get his dream car, the 2004 Lamborghini Gallardo.

How Much Does Parker Nirenstein Salary & Income?

Additionally, Vehicle Virgins has already accumulated more than 500 million views on his channel and regularly gets around 220k new views. Hence, this helps Parker make an estimated income of about $1,100 through ads revenue.

As of 2021, Parker Nirenstein’s has an estimated net worth of $4 million.

If you don’t already know, YouTubers’ major parts of income come from advertisements. Meaning, they become a part of YouTube’s monetization program and make money by putting up ads in their videos.

They usually get around two to seven dollars for every 1000 monetized views on their videos. Thus, this is how Vehicle Virgins make money from ads on YouTube. And in a year, he makes around $400k from ad revenue alone.

How Did Parker Nirenstein Start His Career as a YouTuber?

Parker was always a car enthusiast from a very young age. Hence, he went on to take internships at car companies and even started writing car reviews. However, his idea of creating Vehicle Virgins and join the YouTube platform came when his friends frequently came to him, asking for his advice and recommendations about cars.

Since he is a car enthusiast, most of his friends would take his advice before buying their first cars. Hence, this is where Parker got his inspiration from and created his YouTube channel ‘Vehicle Virgins,’ to help others who knew nothing about cars and needed some genuine reviews.

The reason for the success of Vehicle Virgins comes from the fact that its creator Parker is a passionate car enthusiast and loves his work. He even stated that he loves working on his YouTube channel, and it satisfies him to know that he is helping millions of people out there. And what better way to earn than doing something you love!

Parker has been in the YouTube scene for almost seven years now, and his channel has become a popular one with time. His most popular video to date is under the name “6 Reasons Why I Hate The Ford GT,” which has over 8.5 million views today.

Parker not only makes thousands of dollars through his YouTube channel, but he also has multiple income sources. For one, he gets paid in huge amounts by various brands and companies for endorsement deals and product advertisements. He has also been sponsored by various brands and has worked with big companies like Metromile and Opinion Outpost.

Besides YouTube, Parker also makes a decent income by placing advertisements and brand promotions on his Instagram account, which currently has more than 300k followers. Another additional income source for Parker is his online store. Here, he sells his merchandise such as hats, hoodies, shirts, and jackets.

Who is Parker nirenstein dad?

Parker’s father is a wealthy entrepreneur who owns some big technology companies, his name is John Nirenstein. As of 2021, his father has more than $1 billion.

Parker’s smart move of turning his passion for cars into his career has brought him both fame and wealth. Today, he not only loves what he is doing for a living but also makes millions of money out of it.

As of 2021, Parker Nirenstein’s has an estimated net worth of $4 million.

His YouTube channel’s success reflects on the number of subscribers he has now and his capability to buy such expensive cars and a $2.6 million worth house in the Calabasas hills.