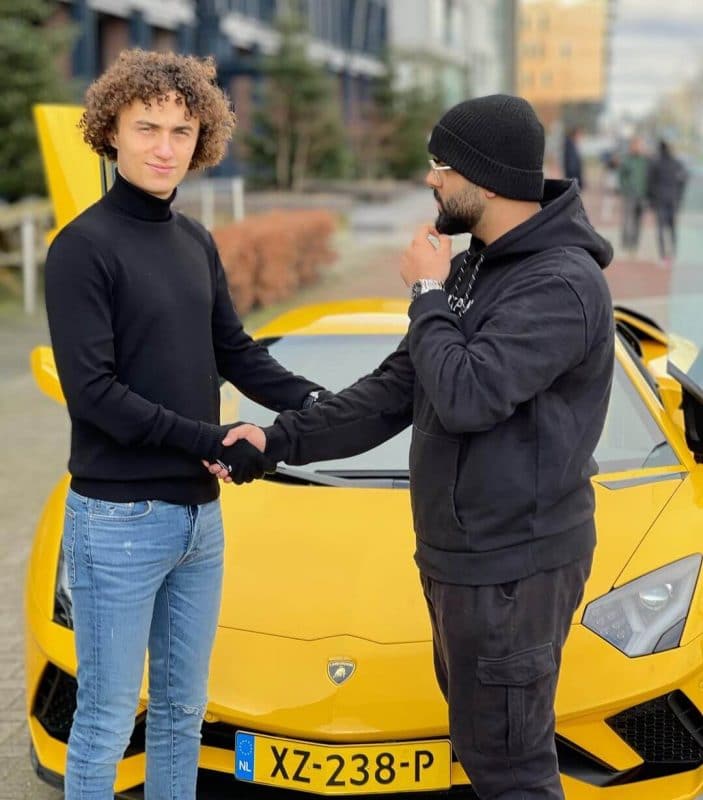 Kwebellkop is a Dutch YouTuber, and he regularly uploads gaming content on his Youtube channel. His real name is Jordi Maxim van den Bussche. Placed among the highest-earning vloggers, Kwebbelkop has a net worth of $18 million as of 2021. he is more popularly known as Kwebbelkop on Youtube. He is one of the most-followed content creators and successful internet personalities. His videos are of shorts and clips genre that is fun, entertaining, and informational.

An enthusiastic gamer and internet sensation among the younger generation, Kwebbelkop is an intriguing person. If you are interested to know about his details, professional life, relationships, earnings, and exciting facts, keep scrolling the page.

It was the 1st of June, 1995, when Kwebblekop was born to his parents Brigitela and Ben in Amsterdam. His parents divorced when he was only a toddler of two years, and his mother raised him and his sister, Lauren, as a single parent. The 25-year-old has green eyes, curly hair, weighs 66kg, and is 1.76 cm tall. He suffered dyslexia as a child and had difficulty in studies but persevered and graduated high school. He is believed to be a college graduate, although details about his higher education are not known.

Since his childhood, Jordi was an avid gamer, and he turned his love for games into a successful profession. But while it may seem that he is all play and no work, the talented YouTuber is a workaholic and worked 10 to 12 hours even as a 19-year-old kid. He works seven days a week, and when he takes a day off, he compensates for the lost time by working harder the following days.

His high-profile dating with AzzyLand started in 2016. The duo met at a trade event for prominent people in the gaming industry, the E3 conference in Los Angeles. The YouTube stars instantly connected, fell in love, and dated for almost four years before they split in 2020. In a 2021 video, he explained that AzzyLand is a highly talented woman and his first love. He respects her, but the long-distance relationship didn’t work out because of their busy work schedules.

How did Kwebbelkop start his career?

The young millionaire was reportedly interested in YouTubing and desired to make it his career since he was a kid. He created his channel in 2008 but wasn’t active until 3rd May 2011. Kwebbelkop uploaded nine videos between May to November 2011 but retook a long break before resuming his videos in October 2012. Since then, Kwebbelkop has been posting videos regularly, and his channel has over 4k videos.

Kwebbelkop’s initial videos were mainly of Minecraft. He called his video series on Minecraft as Kwebbelcraft. His videos of GTA5, Gang Beasts, and GMod Prop Hunt have massive views, and he is famous for these videos. As of 2021, he has 14.2 million people who subscribe to him, and he affectionately calls them KOPS.

Kwebbelkop is also famous for his association with other top internet personalities. In February 2014, he created a group Robust where his friends Aquib and Jelly joined him and uploaded their races together. Aquib left the group a few months later and was replaced by Josh (Slogo). The trio became widely popular.

After Jordi left Robust, he joined Hassan, a German friend, in March 2020 and made videos together. Kwebbelkop announced and helped promote his friend’s YouTube channel Tiger, and they even moved in together in his penthouse. But the duo parted ways because of some misunderstandings, and Hassan renamed his channel Liger.

Kwebbelkop’s most viewed videos are World’s Hardest GTA5 Try Not To Be Impressed Challenge, Biggest Slither Ever, You Laugh- You Take Off Your Clothes, and Coke And Mentos-Try Not To Laugh. All of these videos have over 22 million views, each with tones of positive comments.

How much does Kwebbelkop earn?

During his ten years career as a YouTuber, Kwebbelkop has uploaded over 4k videos. He has 14.3 million people subscribing to his channel and has over 6.1 billion views. SocialBook places his influence score at 73. His exact earning from YouTube is not known. YouTube can pay anywhere from $5 to $18 per 1000 views depending on the location, type of content, and ads played during the video, browsing device, etc. YouTubers can also generate extra revenue from a Google Preferred program, where companies place ads on the top 5% most popular channels.

Besides generating income from YouTube, he also sells merchandise online. His widespread fans seem to be in love with Kwebbelkop’s designs, from custom-made T-shirts and hoodies to accessories and stickers. He sells merchandise at an affordable price and often gets sold out quickly.

RELATED  How Much Money Adam LZ Makes On YouTube? – Net Worth & Bio

Sponsored posts and product advertisements also add to his income. As of 2021, Kwebbelkop’s total net worth is $18 million.