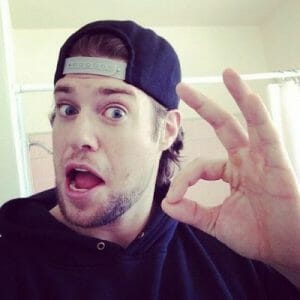 How Much Money Skippy62able (L.A. Beast) Makes? – The internet world is crazy! It gives you endless opportunities to do something big and make a living out of it.

All you need is a creative and unique idea and the determination to work for it. One solid example of a YouTuber who made it big on YouTube with his crazy and funny content is Kevin Thomas Strahle, a.k.a L.A. Beast or Skippy62able.

By profession, he is a competitive eater and uploads all kinds of eating- challenge videos. He has made quite an impressive fan following with more than 2.5 million subscribers on his channel.

People seem to love this 36-year-old YouTuber for his hilarious nature and giant appetite. From raw eggs to lemons to spoiled milk, he has done all sorts of crazy challenges.

If you want to learn more about L.A. Beast and how much money his YouTube channel is making, and his total net worth, just read on.

Kevin Strahle, also known as L.A. Beast, was born on 6th January 1984 in New Jersey. He is a professional competitive eater with his own challenge-based YouTube channel called Skippy62able. His YouTube channel is very popular, with more than 2.6 million subscribers and over 400 million views.

As a kid, Strahle loved to eat a lot, and by the time he was in high school, he was already accepting outrageous eating challenges from his friends.

Strahle also completed the Fatburger’s XXXL eating challenge, for which his friends started calling him a beast. By 2011, he adopted his nickname “L.A. Beast,” which is the name that most of his fans know him by.

Besides the Fatburger challenge, he has also competed in several other professional eating challenges. Some of the challenges include Wild Turkey 81 Eating World Championship, Nathan’s Famous Hot Dog Eating Challenge, Wing Bowl 24, and many more.

He was ranked No. 16 for the world’s best competitive eater in 2012 and No. 17 again in 2013. Strahle also holds the Guinness World Record for eating the most chicken nuggets in 3 minutes.

The previous record was 531 grams, but he beat it by eating 642 grams. He then broke several Guinness World Records such as the world record for eating most bhut jolokia peppers in 2 minutes, eating most powdered doughnuts in 3 minutes, and the record for drinking a  bottle of 32-ounce maple syrup in under 11 seconds.

How Did LA Beast Start His Career As A YouTuber?

L.A. Beast initially started making videos while he was still in his hometown in New Jersey. But it was only after he moved to L.A. that he started his YouTube channel.

The first-ever video he posted on his channel was a challenge video where he can be seen performing a milk chugging challenge. After seeing all the positive responses he received, L.A. Beast decided to upload more videos and changed his YouTube channel’s name to Skippy62able in 2010.

La Beast’s YouTube channel mostly consists of videos where he performs a number of drinking and eating challenges. While his challenges are not always successful, they are still very entertaining and humorous. In some of his videos, you’ll even see him vomiting his food and drinks.

L.A. Beast provides a specific description of his experience in his videos while performing a challenge. You’ll usually hear him say a bunch of funny catchphrases and terms like saying, “I need to get my bearings straight” and then proceeding to show a picture of Bering Strait.

Likewise, you’ll also see many other visuals puns, which make his videos much more fun to watch. All these make his videos very entertaining and allow him to get millions of views and subscribers.

With a massive subscriber base of more than 2.5 million people on his channel ‘skippy62able,’ there is no doubt that Kevin is a popular YouTube sensation.

And he is making a high income out of his channel. The channel has gathered more than 430 million views as of October 2020.

In a single day, skippy62able receives around 120k views from various sources. Hence, as per YouTube’s monetization policy on advertisements, L.A. Beast is most probably generating an estimated income of about $600 per day from ads revenue alone. Hence, in a year, skippy62able generates an estimated annual income of around $220k.

Other than the money he makes from ads revenue, L.A. beast also earns from his videos that go viral on different social media platforms.

With a huge fan following on YouTube, he also gets sponsored by various well-known brands and companies. He also gets paid for advertising the products for several international companies.

Additionally, he has an online store where he sells L.A. Beast merchandise like t-shirts, tank tops, hoodie, snap-backs, and lots more. Hence, his online store has become yet another stable source of income for him.

Not forgetting, he has also won several prizes and has made money from taking part in various competitions.

By now, you already have an idea about the annual earnings of skippy62able from YouTube. However, that is not it! With such a large audience base, Kevin has also created several additional income sources, such as through social media platforms, his online merchandise store, and by also taking part in various competitions. Tallying up all his income and possessions, Kevin’s total net worth comes to around $2 million as of 2020.

Kevin Thomas Strahle, or as you’d like to call, the L.A. Beast is a fine example of how simple and usual tasks like eating food can help someone make a living out of it.

And due to his hard work and creativity, Beast has not only made a living out of his YouTube channel. But he is living the dream now and has become wealthy and famous. With a total net worth of around $2 million, Beast has become one of the most accomplished and popular YouTubers in 2020.