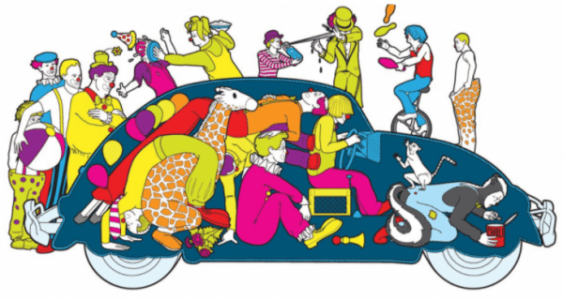 How Do Clown Cars Work? – The people who have visited the circus would have definitely seen the iconic clown car and would obviously know what it is.

Although there are also various other laughable performances done by the clowns in the circus, nothing can replace their iconic car performance.

What Would Be The Possible Trick Behind The Scene?

For everyone who has seen this unbelievably endless laughable number of clowns emerging from the very small exit of the clown car would doubtlessly think that definitely there would be a hidden trap door under the car.

But this is not the actual truth behind the scene, since in most of the cases this performance is usually carried out directly on the ground or on the concrete floor.

An another kind of guess is that the cars are specially customized for this type of clowns’ performance, however the answer is no and those cars are just the decorated productions of the some type of cars such as,

What Is The Real Secret Behind The Making Of The Clown Car?

You might think then what would be the real trick used to create this laughable effect in the circus, the answer is so simple that all the internal parts of the car is entirely removed i.e., the people who make these type of cars would strip the car of all its internal parts such as all the seats, the door panels, the headliners, and any of the interior barriers to the truck.

After all the internal parts of the car is removed, the car gets a very large space inside so that the entire area inside the car is filled by the clowns as plenty as possible. The windows of the car are painted as well and the driver would sit on the milk crate, and then the people are squeezed into this small painted car.

They would actually gather very much close enough and curl up in order to enlarge the space inside the car so that the people can fit inside the car as many as feasible.

The car then starts moving and at the right place when the car stops, finally the performance is carried out i.e., the clowns start to come out of the car endlessly in a manner that the crowd in front of them tends to laugh endlessly.

How Many Clowns Can Be Fit Inside A Clown Car?

To know how much number of clowns can be fit inside a clown car, the simple volume calculation is enough. The height as well as the weight of an ASC (American Standard Clown) is 5 feet 8 inches and 158 pounds respectively.

What Are The Interesting Facts About The Clown Cars?

The clown car routine was first made popular in the year 1950 by the circus performers in the Cole Brothers Circus, but the actual origin of this kind of performance is not known correctly which would go back to the era of the silent movies.

During the 1950s Lou Jacob from the Ringling Bros Circus first popularized his version of the clown car gag. For almost 60 year, she gave the comedic effect to the audience by cramming the 6 feet frame into a customized 23 inch tall and performed his solo actions in the circus instead of stuffing the bunch of clowns along with him.

He also built his own car using a washing machine engine, whose replica can be even found now on the display in the Ringling Brothers Circus museum in Sarasota, Florida. This circus is considered as the most famous circus in the world.

In the French town of Castries, in the year 2013 a bunch of 31 clowns squeezed themselves in a Citroën 2CV car in order to create a world record. The tiny car, Citroën2CV was actually produced from the year 1949 until 1990 and this car was almost sold exclusively in Europe.

A car called Peggy is considered as the “King of clown cars”, which was originally built by the Lawrence, Indiana. This news was actually found in the press photo dated September 26, 1939 which was taken at an American Legion convention parade held in Chicago in the same year.

Not only in the circus, this type of car is also often being used in the various films as the comedic gag, and one clown car is featured noticeably in Mel Brooks’ remake of the film To Be or Not To Be. Thus this iconic circus clown prop has been also been used in the film industry to entertain the audience and it gives you great excitement while watching the clown cars.

Mark Paul Gosselaar Net Worth: Is He Really Retired?
How Do Bumper Cars Work? Part & Physics