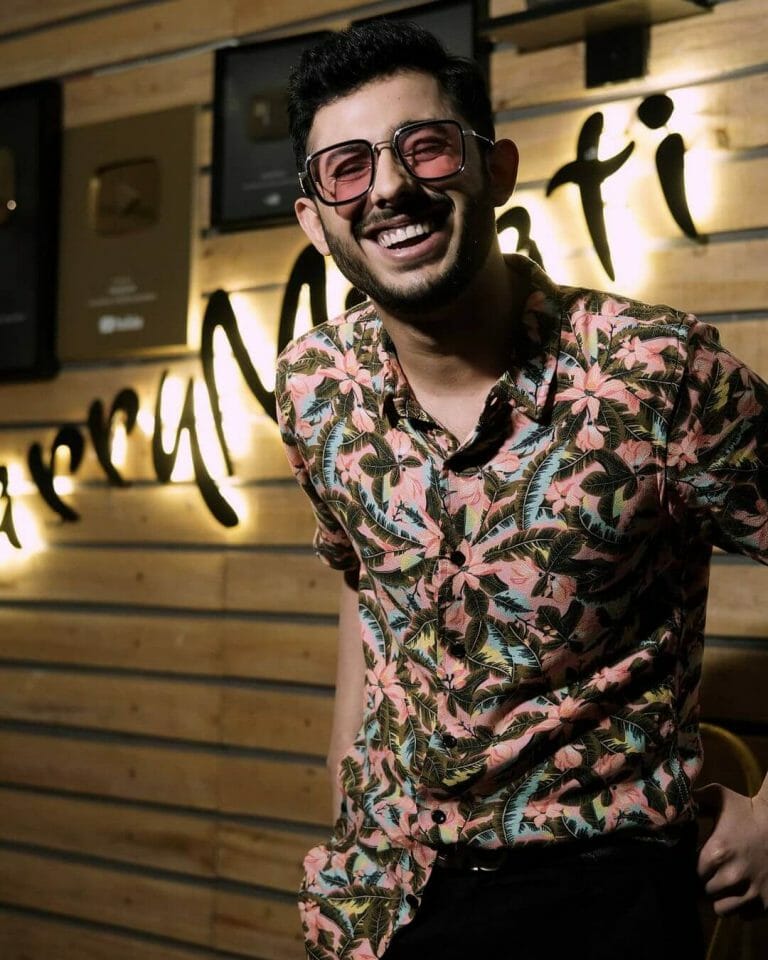 As of 2021, Carryminati’s net worth currently stands at around $10 million USD. This comes to around 28 crores in Indian Currency. If the estimates are correct, Carryminati makes anywhere from $17,000 to $272,000 a month. By calculating the average at $145,000, Carryminati makes around $1.7 million just from his main YouTube channel.

The most popular Youtuber in India, Carryminati is one of the top Youtubers in the whole of Asia and not just in India. He is well known for the satirical and roast videos that he regularly uploads on his YouTube channel. His YouTube channel also consists of gaming videos as well. Besides being a Youtuber, Carryminati is also a talented rapper and actor.

He rose to fame during the last seven years. However, the one incident that made him really popular was when he uploaded a video titled “YouTube vs. TikTok.” The video was later deleted by YouTube; however, it went viral among the YouTube community, which really pushed his career further as a Youtuber.

Due to his success as a YouTuber, Carryminati has not only become popular but also one of the richest internet personalities in India. In this article, we will talk about his career and his Net Worth.

Ajey Nagar, popularly known by his stage name Carryminati is a famous Indian Youtuber known for his rants and roasts videos. His videos have a distinctive style that makes him easily recognizable among his fans. What makes him special and entertaining is his astonishing voice and the way he talks. The videos are usually made of photos, gameplays, and short clips of videos.

Carryminati rose to fame after he made videos like “I Want a Girl,” “Making Money with BB Ki Vines,” “Girl With Sweg,” “Roasting BB Ki Vines,” etc. After making such videos, he became one of the fastest-growing YouTubers in India. By July 2016, he gained more than 50,000 subscribers in a month.

Carryminati, whose real name is Ajey Nagar, was born on June 12th, 1999, in the city of Faridabad. He is an Indian comedian, rapper, gamer, roster, and a successful YouTuber. The channel Carryminati is one of the most popular YouTube channels in India. He is famous for mocking several people, including famous social media personalities. His way of mocking people include rapping, comedy, parody, and also playing live games on his YouTube channel.

Ajey Nagar attended his school up to 2016, after which he dropped out to start his career in YouTube. The main factor that led to his decision to give up school was during his Class 12 exam, where he felt unsure about his upcoming Economics exam.

Carryminati always wanted to make YouTube videos ever since he was young. He had the desire to become popular among the people in his country. By the age of 10, Ajey started making his videos and began to upload them on his first YouTube channel, which was named Steal the Fearzz. His videos included topics on computer hacks and tips, guitars, and football.

One of the biggest stumbling blocks on his way was that he was never able to garner more than 400 views on his YouTube videos. Most of the videos that he wanted to make were already on YouTube. The next problem was that he was still a child, which made it even harder for him to create better and new content.

When he reached the age of 15, Ajey again created another YouTube channel called Addicted A1. This second channel from him most contained videos of him player Counter-Strike. While it was not a popular game in India, a lot of people came to watch his videos to see the memes. He also made videos where he mimicked some of the biggest celebrities in India, including Hrithik Roshan and Sunny Deol.

Even with his new YouTube channel and new style of content, Ajey was unable to leave any mark on his career. So, after a few days, he changed his YouTube name to carrydeol and started roasting again. By this time, his channel was slowly starting to do well. After some time, he roasted another comedian and Youtuber, Bhuvan Bam, which kickstarted his popularity. He later changed the name to Carryminati, which we know of today.

In the year 2017, Carryminati created another YouTube channel called CarryIsLive. In this second major YouTube channel, Ajey plays video games and live streams them to his audience. This channel also has a huge number of subscribers, which is close to 10 million.

One of the defining moments in his career is when he made a YouTube video titled “YouTube Vs Tiktok,” which gained a lot of attention. This video became the most liked non-music YouTube video in India.

Ajey Nagar first started making YouTube videos while he was only ten years old. However, his main YouTube channel, which is now the most subscribed Indian YouTube channel, was created in 2014. The original of this channel was Addicted A1.

As of 2021, Ajey Nagar, also known as Carryminati, has two major YouTube channels, which are Carryminati and CarryIsLive.

How does Carryminati make his money?

Ajey Nagar, also known as Carryminati makes his money mainly through YouTube ad revenue, video sponsors, and brand deals. As of 2021, he the most subscribed Indian solo Youtuber, which makes him one of the most highly sought-after internet personalities. As of 2021, Carryminati’s net worth currently stands at around $10 million.