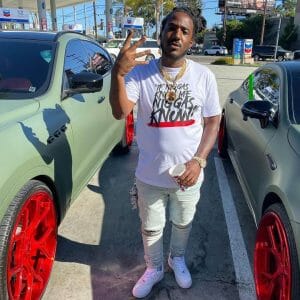 Mozzy is a popular American rapper hailing from Sacramento. California. His real name is Timothy Cornell Patterson, he started his rapping career in 2004 and is now quite a famous celebrity with a net worth of $1 million. Some of his albums that stood out among others include “Bladadah” (2015), “Mandatory Check” (2016), and “1 Up Top Ahk” (2017).

If you want to know more about Mozzy, his earnings, life, and almost everything we could dig about this famous rapper, then keep reading. You might just find something interesting!

Mozzy is of African-American descent and 5 feet 7 inches tall. Born on June 24, 1987, he had a very humble upbringing with his mother had drug addiction issues, and his father mostly behind bars. Mozzy’s grandmother, Brenda Patterson-Usher, raised him in the neighborhood of Oak Park, and he went to Sacramento High School. Although he was dropped out of school, he eventually got his GED and started working local jobs until pursuing his music career full-time in 2010.

Mozzy explains that coming from a neighborhood like Oak Park is what made him humble. He has been rapping for more than a decade until finally getting noticed; hence, he calls himself “the chosen one.” Mozzy fell prey to his surrounding influences and got arrested several times by the Sacramento Police under different charges between 2005 and 2008. He spent many days in jail for illegal possession of arms and evading authorities.

He was also sent to San Quentin State Prison in 2014. Despite receiving numerous offers to tour worldwide and across America, he could not make it as he was not allowed to leave the state until 2017. The government forbade him from going out of California until the end of his probation in 2017.

Mozzy is married and keeps his personal life very private and away from the media. Hence, there is no information about his wife’s identity. The rapper has two daughters and lives in Los Angeles with his family.

How did Mozzy begin his music career?

Mozzy started his career in 2004 when he was known as Lil Tim. He consistently worked as a musician for eleven years until he finally made his mark in 2015 with his album “Bladadah.” The album received recognition from the showbiz industry and was ranked 2015’s 22nd best rap album by Rolling Stone. Overall, 2015 ended on a good note for Mozzy, and both Rolling Stone and Complex Magazine acclaimed his effort.

“Mandatory Check,” another project of Mozzy in 2016, also hit the top 7 on the Billboard chart of Rap Albums. Artists like G-Eazy, YFN Lucci, and Jadakiss made guest appearances on his new 2017 project called “Fake Famous.” Throughout his music career, Mozzy collaborated with famous artists such as Kidd Cartel, Philthy Rich, Nef the Pharoah, and YG.

Mozzy changed to his current name in 2012 and released twenty-two solo albums, and seventeen collaborated works with other artists from 2011 to 2019. He kept his music flowing independently and also with Livewire Entertainment and Blackmarket Records until finally launching Mozzy Records, the rapper’s own label.

Although he cites his early influences on music to be Dr. Dre, Snoop Dogg, and rap legends from the West Coast, his tracks usually reflect the gang life of Sacramento. Mozzy has two Billboard Top 200 albums, including “1 Up Top Ahk” and “Gangland Landlord.” He was also one of the featured artists on the soundtrack of the movie Black Panther.

Mozzy is currently signed with Blackmarket Records, Real talk Entertainment, Livewire Entertainment, and Empire Distribution. If interested, you can check out some of his most popular songs like “Momma We Made It,” “Seasons,” “Nobody Knows,” and “Tomorrow Ain’t Promised.” Altogether he has a collection of twenty-four solo music albums and EPs, 19 collaborative albums, and 105 tracks. “Bladadah” is known to be Mozzy’s most successful album, which earned him the title of “best run of 2015” and recognition from Rolling Stone and Complex Magazine.

How Much Does Mozzy Earn?

Mozzy is a renowned name in the music industry, and his estimated net worth is $750 thousand. His earnings derive from song features, album sales, YouTube ads, tours, and live shows. Mozzy has 511K subscribers on YouTube and more than 320 million views. He has some successful albums that make huge sales and constitute a big part of this income.

YouTubers earn between $2 and $7 per one thousand monetized views, and that too, after the app deducts its share. There are various factors that influence the range of monetization, including how many ads are in a video, the number of viewers skipping the ads, content type, ad inventory, engagement, and more.

Besides music-related work and income, Mozzy also has other sources. He has a line of merchandise where he sells hoodies, tees, backpacks, beanies, and joggers. The merch line is readily available for fans and subscribers who like to support him, and also to those who just want to get a hold of his clothing line. As an artist with ever-growing fame and popularity, Mozzy has wide access to a big audience, making his business successful and open to opportunities.

Mozzy’s grandmother, who raised him, was a member of the Black Panther Party. He began rapping when he was only sixteen alongside Genaro “GP the Beast,” his uncle. Today, Mozzy is a well-known artist in the music industry. He entertained thousands of fans through his music throughout his musical career.  Mozzy’s love and appreciation for music made him walk past hurdles and adversities and is now a successful rapper. We can say that his path to fame and life, in general, was never easy and comfortable. But by accepting, acknowledging, and learning from his mistakes, he continues to strive.