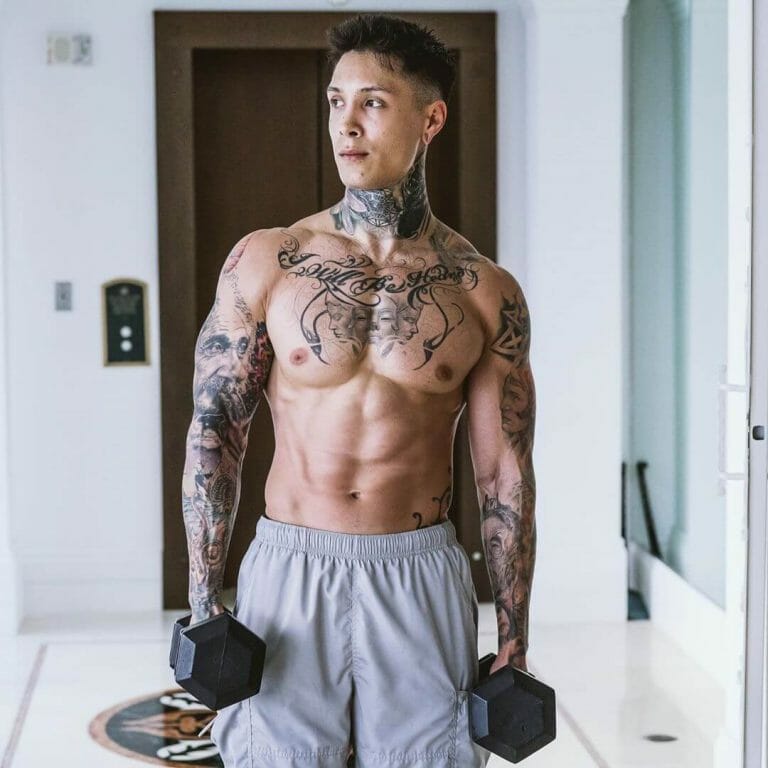 Chris Heria Net Worth & Bio – The internet world is massive, and people who have made it big here earn a crazy amount of money! One such popular name in the online world is Chris Heria. He is one of the most accomplished YouTubers out there and makes revenue on YouTube in terms of millions!

However, Chris Heria is not just a star in the internet world. He is also a well-known personality in the fitness industry. Chris has made a solid reputation in the fitness world as a calisthenics trainer. Hence, the content on his YouTube channel is also dedicated to fitness.

Being a star in both the fitness as well as the internet industry has definitely made Chris Heria super-rich. And this 28-year-old fitness freak is living the dream by earning in terms of millions.

If you don’t believe it yet, just read on to find out more about the income and net worth of Chris Heria in 2021.

Christian D. Heria, popularly known as Chris Heria, was born in Miami, Florida, in December 1991. He is a professional calisthenics trainer, YouTuber, social media personality, and a BarStarzz sponsored athlete.

As a fitness trainer and enthusiast, Chris has contributed immensely to the fitness industry by establishing the Miami Trainer, the Calisthenics Academy, and the Calisthenics Evolution Institute.

He is also the CEO and founder of the ThenX fitness program, a workout routine involving calisthenics and weights. During his early years, he has also participated and represented the US in the Street Workout World Championship.

When it comes to his career as an internet personality, Chris has a YouTube channel titled “OFFICIALTHENX,” which is a part of his ThenX fitness program.

As of 2021, he has more than 6 million subscribers and has accumulated a total of more than 400 million views so far. Additionally, Chris also runs a secondary YouTube channel under his name, “Chris Heria.”

Chris created his first YouTube channel “OFFICIALTHENX” in the month of February 2013. At present, the channel has over 6 million subscribers, with more than 400 million combined views.

He collaborates with his brother and fellow YouTubers Stefan Heria, Zay Tiggs, and Osvaldo Lugones in this channel. You’ll find all sorts of workout and fitness-related content on this channel, including muscle building, Tabata, fat burning workouts, superhuman strength workout, HIIT training, and many more.

Chris’s second channel titled “Chris Heria” was created in August 2013. This is his personal YouTube channel and has over 2.5 million subscribers as of 2021.

This channel has received over 140 million views to date. On this channel, most of his content is about his family, journey, home workouts, diet, nutrition, etc.

How Much Money Does Chris Heria Make on YouTube?

With over 6 million subscribers on his primary YouTube channel “OfficialThenX,” there is no doubt that Chris is making a high income out of it.

He has received more than 400 million views and continues to receive about 600k views in a single day from all his videos. This amount of views generates an estimated income of $3,000 in a single day, depending upon the number of advertisements on his videos. Hence, in a year, his annual revenue from ads comes to about $1.1 million.

YouTubers generally get an amount of $3 – $10 for every 1000 monetized views they receive on YouTube. This payment is after YouTube takes its cut.

Different advertisements will bring different incomes as they depend solely on how much each brand or company is paying. Generally, the minimum cost limit on an advertisement per view is at $0.01.

Hence considering all these aspects as well as other factors like the number of ads on the video, type of advertisement and content, ad engagement, ad inventory, etc. Chris makes around $3,000 per day on YouTube.

How much Additional Earning Does Chris Heria Make?

Besides his main YouTube channel, Chris also makes an additional earning through his second channel, “Chris Heria.” The channel has over 2.5 million subscribers, with more than 140 million views.

On average, the channel receives around 380k views in a single day. As per the YouTube monetized ads program, Chris is able to make an income of about $1,900 per day, which makes an estimated annual revenue of $700k.

Apart from his YouTube channels, Chris has other additional sources of income. He offers a paid subscription on his official website for his workout programs, where several individuals have already signed up. Chris also sells merchandise on his website, which makes up his total net worth.

By having a career simultaneously in the fitness and internet world, Chris Heria has earned not only a massive fan base but also a great fortune. He is popular not only in the fitness industry and YouTube community but also on social media platforms.

He currently has over a million followers on Instagram and is known as a social media personality. Since he has quite a large following base on Instagram, Chris also gets paid by various international brands for endorsement deals and product placement.

His career as a calisthenics trainer, social media personality, and a YouTuber has earned him a net worth of around $4 million.

Chris got into the fitness world from quite an early age. Before he got famous, he also taught at various workshops and seminars. He has also competed on an international platform as a bar athlete.

With an estimated net worth of $4 million, Chris Heria is one of the highest-earning fitness YouTubers worldwide. He has a son named Zen Heria and is living in the US.

He once wrote on a Reddit post that his relationship with his son is amazing and that all his inspiration and drive to accomplish his goals and work hard every day comes from him.